Embodied Carbon - Giving the workers what they want?

Home / Insights / Embodied Carbon – Giving the workers what they want?

GIVING THE WORKERS WHAT THEY WANT? EMBODIED CARBON, COMMERCIAL BUILDINGS, AND LONDON AS A GLOBALLY COMPETITIVE CENTRE

No self-respecting New Year’s trivia quiz would go without a question on the Word or Phrase of the Year. And 2022 was such a year that there is a cornucopia of candidates for the planning system’s Word of the Year, including nutrient neutrality, the Standard Method, fire safety –not to mention the proliferation of LURB-related puns.

One top contender would have to be embodied carbon, given the time now being spent discussing embodied-carbon related issues in London development, especially since the decision of the then (and now again) Secretary of State, Michael Gove, to call in the Oxford Street Marks and Spencer proposals following criticism on carbon grounds.

Download the latest briefing note discussing how embodied carbon should be considered alongside the wider economic and public policy and the affect this could have on post-Covid recovery. 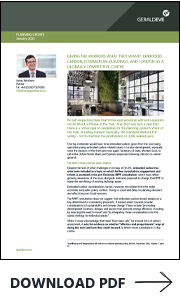