The UK economy avoided recession in Q3 but has been buffeted by weak global growth and Brexit-related uncertainty. A range of higher frequency indicators suggest that the underlying pace of activity was weak, notably manufacturing.

Total commercial property investment for Q3 was £12.2bn – the highest quarter for 2019 but lower than any in 2018 and investment remains historically subdued. The Q3 tick-up was driven by the Alternatives sector, with some exceptional portfolio deals.

All Property annual total return was 2% in Q3 – the lowest return since Q3 2009 and
the fallout from the global financial crisis. On a more encouraging note, this marked an unprecedented 40th quarter of consecutive positive annual total returns.

For Offices, a growing disconnect between pricing expectations of buyers and sellers
reduced the number of transactions in 2019 to a decade low. Overseas investors continue to dominate central London investment, increasingly targeting long income. Over the medium term, demand and supply dynamics favour key UK regional office markets rather than the more cyclical London markets; consequently the yield gap between them has almost halved.

Retail investment was extremely low in Q3 – one of the few times historically where the total has been below £1bn. The recent sharp increase in retail yields was in part a ‘structural’ outward shift, owing to a sustained shift in shopping patterns. This additional shift was an estimated 81bps, which eroded a further 11% from retail capital values. Nevertheless, since the current rental downturn has not been caused by a recession-generated collapse in consumer demand, though longer in duration, the fall in real retail rents in this cycle is likely to be shallower than previous cycles.

For Industrial, a sharp fall in portfolio deals reduced the average transacted size to a
seven-year low in Q3. Yield stabilisation means the dominant total returns over the other property segments have now mostly fallen out of the figures. Off-prime yields have softened as investors focus on long income and the best assets, such as in London, where values have held better. With a stronger future rental growth profile we expect multi-let yields to follow a yield path below distribution warehouses for the first time on record.

The central scenario is a so-called orderly Brexit in 2020 after the December general election. There continues to be domestic investment demand for UK commercial property, an attractiveness for overseas buyers, and it is hoped that the emergence of greater clarity will be positive for investment volumes, which we expect to pick up in 2020.

Commercial property annual total return is set to fall to a low point of 1.6% in 2019, though the improvement in 2020 will be only to 2.6%. Income return is set to partially offset expected negative
capital growth that will result from yield softening across most property segments. 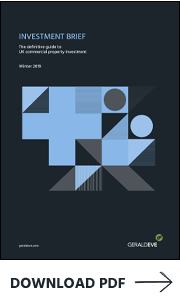 The all property annual total return was 2% in Q3, marking both the 40th consecutive quarter of positive annual returns, but also the lowest since Q3 2009.