South East office transactions volumes remained robust in 2018, which transpired to be year of mixed investor sentiment. Transaction volumes totalled £3.62bn across 148 deals, a 2.4% fall on volumes seen in 2017 (£3.7bn) but slightly ahead of the 5 year average transaction volume of £3.42bn. A year-on–year fall was largely anticipated as 2017 was one of the strongest years for investment volumes in the current cycle.

The average deal size in 2018 was £24.5m, slightly ahead of the previous year (£24.0m). Q4 2018 saw £916m of transactions, a 3.9% increase from the £880m transacted in Q3, but slightly lower than expected as Brexit uncertainty increased during the final two months of the year and a number of deals were pushed into 2019. Rising political uncertainty in Q4 negatively
impacted investor demand towards the end of the year particularly for larger assets in excess of £50m. The decreased liquidity of larger lot sizes in Q4 was evidenced by a fall in the average lot size transacted, which was £19.92m, a 30% fall on average lot size seen in Q3 2018 (£28.4m).

Prime yields throughout 2018 remained stable at 5.25% NIY (although we are witnessing deals below this), in line with 2017, however, the yield spread between prime and secondary widened in Q4 2018, particularly for short let assets on business parks, as property companies and private equity funds priced in political instability.

South East occupational markets remained resilient throughout 2018 with total take-up hitting c.3.9m sq ft. Occupier confidence returned to the market with a number of high profile lettings being agreed including Sanofi’s 71,000 sq ft letting at Thames Valley Park in Reading. The South East office market is still characterised by a severe lack of speculative development, while permitted development has eroded stock in many markets. Rental growth is polarised but is being evidenced across many of the South East markets, which continues to drive returns and draw investors to the sector. 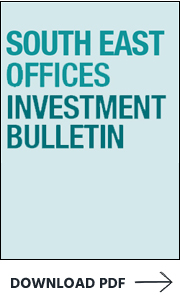