Investor appetite continues to improve as lockdown restrictions ease and workers return to the office.

Investor confidence continued to improve in Q3 2021 in line with the easing of COVID restrictions and the accelerated rate of return to the office. Despite Q3 being a notoriously quiet quarter given the limiting impact of the summer holiday period on the release of new stock to the market, £788.3m was traded which reflects just a -2.93% fall on Q2. The £788.3m transacted reflects a staggering 133% increase on the £337.7m transacted in Q3 2020.  In addition, there is approximately £653m under offer, which further highlights that confidence is beginning to improve in the south east office investment market.

Since the onset of the pandemic, investors have typically favoured income and covenant strength with transacted AWULTs consistently above 7 years. Long income assets continue to be in favour, with notable transactions including M7’s purchases of Crossway’s Point, Dartford (9.3 years AWULT) and Janus House, Basildon (8 years AWULT). However there has also been an increase in risk appetite in Q3, emphasised by the growing number of transactions with shorter unexpired terms. Average AWULT to expiry for assets traded in Q3 was 6.6 years compared with 7.5 years in Q2 2021. Notable transactions with shorter income profiles include Kennedy Wilson’s purchase of The Capitol Building, Bracknell for £44.5m (3.3 year AWULT) and Eagle Street’s purchase of Hertz House, Uxbridge for £18.5m (4.2 year AWULT).

This increased risk appetite is predominately due to the growing confidence in the south east occupational market. Key leasing deals in Q3 included the 151,000 sq ft letting of The Bower at Stockley Park to Canon, the 31,000 sq ft letting of Harwell Science and Innovation campus to Vaccitech and the 21,500 sq ft letting of 22 Market Street, Maidenhead to Techtronic Industries, the largest deal recorded in Maidenhead in the past 3 years. Furthermore, data technology provider InterSystems is understood to be in talks to take 43,000 sq ft at One Victoria Street, Windsor at a rent of around £45 sq ft. This would be the highest rent ever achieved in the Thames Valley, a record previously set in Q2 2021 when Intercontinental let 57,387 sq ft at the speculative Windsor One and Two at £42 sq ft.

The UK life sciences sector continues to be a major target for global capital and yields are compressing due to this heightened investor competition. Of the £788.3m transacted in Q3, a staggering £397m (50%) was in the life sciences sector. The most notable transaction was Oxford University’s Magdalen College selecting GIC as its joint venture partner for Oxford Science Park, valuing the science park at reportedly £400m. Other transactions include Blackstone’s purchase of Cambridge International Technology Park for approximately £135m and British Land’s purchase of Peterhouse Technology Park for £75.18m, which transacted at more than 80bps sharper than the quoting price.

Q3 has also seen an increase in the sale of assets with permitted development consents being launched prior to the introduction of new restrictions, which came into effect on 1st August 2021. A total of £90m of residential development transactions either completed or exchanged in Q3 2021. Notable transactions include the purchase of Copthall House, Sutton by a private individual for £11m and the acquisition of Holland House, Bournemouth by Marchmont for £9.85m.

Property Companies and Institutions were the largest net sellers in Q3, accounting for £246m (31%) and £245m (31%) of the transaction volume respectively. Institutional sales were largely from retail funds where the focus remains on ensuring healthy liquidity levels to meet redemption requests. Despite this, some institutional investors also sought to re-enter the market in Q3 such as CBREIM’s off-market acquisition of The Brickworks, Reading for £10.05m and the fact that more institutions now feature in disposal interest schedules.

Looking forward, we expect sentiment to continue to improve in the office sector as the return to the office quickens and confidence in the occupational market grows. We expect a significant increase in new stock coming to market in Q4 as vendors become increasingly confident in committing to sales processes, which in turn will bolster transactional activity in the lead up to the year-end. 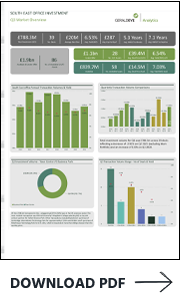