While uncertainty reigns across the country, the London office market continues to be active with 12.8 million sq ft of space taken in 2017, a 12% increase on the previous year.
The changing nature of occupier employment across the capital was reflected by the fact that the media & tech sector was the most active throughout the year, accounting for 28% of total take-up. This included significant deals for Dentsu Aegis in King’s Cross & Euston (312,000 sq ft), NEX group in Shoreditch (112,000 sq ft), and Spotify in Covent Garden (104,000 sq ft).
Although finance & banking occupiers have started to prepare for life outside of the EU, which will include moving some positions from London to other EU member states, the sector remained active, acquiring 1.5 million sq ft in 2017, which represents 17% of annual take-up.

An increasing number of occupiers are sub-letting space

An increasing number of occupiers are sub-letting space back to the market as they reassess their real estate needs. Whether it’s to reduce overall costs, or simply due to a change in business strategy, the volume of tenant space in the market has increased from 19% to 24% of total availability. As a result, we’ve seen the volume of unrefurbished space increase over the last 12 months.
The finance & banking sector are the most active in releasing space, and currently account for 30% of all tenant space.
However despite this rise in tenant space, overall availability has actually fallen with an availability rate of 4.8% recorded in December 2017, compared to 5.4% 12 months earlier. This is a result of take-up erosion of existing supply, plus significant volumes of development space being let pre completion.

Over 50% of development space has been let

There is currently 10.2 million sq ft of new office space under construction across central London, with the majority being built in the City. However this level of development is likely to decrease as developers pause to see the full impact of leaving the EU before committing to new schemes.
Of the space currently under construction, 51% has already been pre-let. With grade A availability falling by 25% in 2017, it is likely that pre-letting activity will continue throughout 2018, and could potentially lead to a real shortage of grade A availability for a number of submarkets.
King’s Cross & Euston in particular will feel the supply squeeze. The submarket already has the lowest availability rate in London at 1.5%, and currently all of the 180,000 sq ft under construction is fully let. 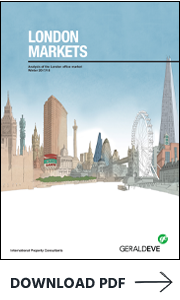