Home / Insights / Thousands of businesses could miss out on £700m Covid business rates relief as only half of councils pay out support, new research finds

Thousands of businesses could miss out on £700m Covid business rates relief as only half of councils pay out support, new research finds

Only around half of English councils have started making support payments to businesses from a £1.5bn rates relief package first announced by the Government in March 2021, a Freedom of Information request has found.

Property consultancy Gerald Eve FOI’d all 309 councils in England asking them how much has been paid out to local businesses since the announcement was first made 17 months ago by then-chancellor Rishi Sunak.

Of the 219 who replied, just over 127, or 58%, have started paying out anything, despite a deadline for concluding relief payments coming in less than two months.

Responding councils which have started making payments account for £667m of the £1.5bn funding package but have collectively paid out just £351m. Extrapolating this trend to all 309 councils in England would suggest a maximum of only £790m will be paid out.  Any surplus must be handed back to the Government, short-changing businesses by around £700m.

On 25 March 2021, the government announced the COVID-19 Additional Relief Fund (CARF), a £1.5bn support package to compensate businesses impacted by the pandemic but which had not been granted any business rates support, such as that provided to retailers, the leisure and hospitality industries.

Those entitled to the CARF fund include office occupiers, warehouses and manufacturers. The fund was introduced to replace rates appeals made by hundreds of thousands of businesses, which the government annulled retrospectively. 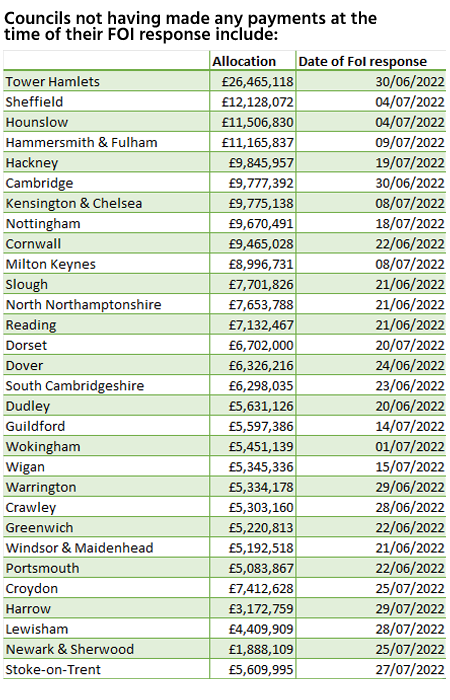 Jerry Schurder, Business Rates Policy Lead at Gerald Eve, said: “This fund was supposed to help businesses negatively impacted by the pandemic, but which were denied other business rates support. The government claimed CARF was the fastest and fairest way of getting support to businesses that need it the most, but the past 17 months has shown this to be complete hyperbole. In fact, the opposite is true. Businesses shouldn’t have to wait well over a year to get the rates relief they so desperately need.”

Schurder places much of the blame for delay on central government, which only confirmed the sums each council would be permitted to distribute on 15 December 2021. Simultaneously, it issued general guidance to councils on the types of businesses to which support should be targeted and required each authority to devise its own relief scheme. This created further delay whilst hard-pressed councils designed local support schemes and set up their own application processes.

Schurder added: “Local Authority business rates teams are already over stretched dealing with the retail hospitality and leisure reliefs, grants and the energy rebate which is paid via council tax bills. . To help local authorities catch up, we would urge the Government to extend the 30 September deadline by six months to ensure the £700m still waiting to be allocated gets to those who need it.

“Any sums remaining unallocated when the deadline passes needs to be returned by councils to the Exchequer which would be a travesty of justice. Even those councils which have been providing CARF relief have often failed to distribute more than small sums. 23 councils have distributed less than 10% of the amounts made available to them by HM Treasury.”

The best performing councils have issued over 90% of their allocation, including the City of London which was given the second largest sum totalling £64,361,586. Bolsover, East Hampshire, Sunderland, Lewes and Blackpool have paid out 100% of their allocated pots.

Schurder explained: “Sadly, it’s a case of too little, too late for the hundreds of thousands of firms that were retrospectively denied their rights to appeal their rates bills but have yet to receive a penny from the local authorities. It’s a travesty that £700m meant to support businesses through the pandemic will likely never actually reach them.”

Perversely, 30 councils, including Sandwell, Solihull, Bromley and York, are paying CARF relief without requiring any application process, creating headaches for those firms that have traded well through the pandemic and do not need or wish to receive government support. They are now faced with identifying where they have unknowingly received a reduction on their rates bill so that they can return the sums allocated to them.

Schurder said: “With its £1.5bn fund the government made the right noises about supporting businesses. But the reality is many companies which struggled through the pandemic have been unable to gain access to these funds when they needed them the most. Delays by some councils mean that they will be timed-out and no longer permitted to issue the support that local businesses so desperately need.”