We have seen continued volatility in the costs of SWAP rates with rates up c.1.5% since 30th August with 2- and 3-year swaps both pricing over 5%.

The Bank of England have continued to increase the Base Rate with a base of 2.25% and expectations of further rises with some commentators suggesting a base of 6%.

Interest rates are currently at a 14 year high and show no sign of decreasing in the short to medium term.

Following the ‘Mini-Budget’ on 23rd September, the market reacted badly due to unfunded tax-cuts and increased Government borrowing. This led to a sharp decline in the value of the Pound vs its major trading partners. For a while, the prospect of parity with the dollar looked like an option albeit the Pound has recovered a little since its record low. This depreciation in the value of Sterling will mean that foreign buyers (especially America) will see the UK as ‘cheap’ despite the rising cost of debt.

If you would like more information on any of these topics, our expertise and knowledge in the service, or to discuss a particular project, please do contact one of our team. 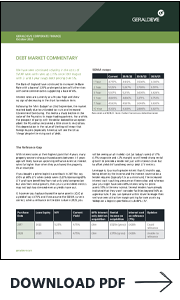