The government commented on 43 recommendations made by the Law Commission and a full commentary on the issues discussed can be found here. The government states:

“In principle, we accept the vast majority of the report’s 43 recommendations, and will look to implement them when Parliamentary time allows”.

Part 7, Sections 117-129 of the Charity Act 2011 deals with the current limitations on disposals and mortgages. Broadly speaking, the law places obligations on charity trustees to obtain advice from a Qualified Surveyor before disposing of an interest in land and to receive best terms reasonable obtainable for the interest being offered. There are some exclusions, including a disposal to another charity for terms otherwise than for the best price, the disposal of some ecclesiastical property or those charities governed by the Universities and College Estates Act 1925.

Specifically, Section 119 (i) applies to dispositions other than short leases and before entering into an agreement for sale, the charity trustee must:

1) Obtain and consider a written report on the proposed disposition from a Qualified Surveyor instructed by the trustees and acting exclusively for the charity;

2) Advertise the proposed disposition for such a period and in such a manner as is advised in the Surveyor’s report, unless the report advises that it would not be in the best interests of the charity to advertise it; and

3) Decide that they are satisfied, having considered the surveyor’s report, that the terms proposed are the best that can be reasonably obtained for the charity.

For the purpose of the Act, a Qualified Surveyor is a fellow or professional associate of the Royal Institution of Chartered Surveyors (RICS).

The existing law is considered by some to be complex, overly burdensome and causing unnecessary expense to charities and more often than not, interfering with rather than enabling the proper management of the land transaction.

The Law Commission’s consultation considered the extent to which charity trustees should be compelled to seek advice before disposing of charity land, and what that advice should cover. The proposed changes will allow trustees to seek professional advice which is proportionate to the particular circumstances of the property disposal, are intended to resolve gaps in protection for buyers of charity land and will simplify the law about disposing of charity property.

The Law Commission’s recommendations on charity property disposals accepted by the Government in its announcement today are as follows:

2) Qualified charity trustees, officers and employees to be able to give advice.

3) The Charities (Qualified Surveyor’s Reports) Regulations 1992 to be replaced with regulations that requires the designated advisor to provide:

a) Advice Concerning:
i) what sum to expect (or if an offer has already been made whether the offer represents the market value of the land);

ii) whether (and if so, how) the value of the land can be enhanced;

iii) marketing the land (or, if an offer has already been made, any further marketing that would be desirable;

iv) anything else which could be done to ensure that the terms of the transaction are the best that could be reasonably obtained for the charity; and

b) A self-certification by the advisor that they:
i) have the appropriate expertise and experience to provide the advice required
ii) do not have any conflicts of interest with the charity.

4) The statutory requirement that charity trustees advertise the proposed disposition in the manner advised in the surveyor’s report be removed.

With regard to charities acquiring property, the Charity Commission currently strongly recommends that Part 7 is followed for acquisitions and as proposed, there are no intentions to extend the requirements of Part 7 to acquisitions. The Law Commission recommends the following:

1) The guidance should reflect our recommendations to reform the regime governing the disposal of land, for example, suggesting that advice could be obtained from a fellow of the National Association of Estate Agents or fellow of the Central Association of Agricultural Valuers as well as a member of the Royal Institution of Chartered Surveyors.

3) The suggestion that trustees seek advice on whether the proposed acquisition is in the interests of the charity should be removed.

The Government accepts the recommendations but highlights the Law Commission’s view that obtaining advice is not always necessary.  The statement today also states that the Charity Commission has also accepted this recommendation.

The Government comments: “Its recommendations are, at first sight, highly technical; together, however, they will make it simpler and easier for charities to respond to opportunities to achieve their charitable purposes in an effective, sustainable and impactful way. The recommendations also maintain important safeguards to ensure the best use of charities’ resources”.

We think that overall, the proposals will be welcomed by charity trustees who will expect to see a direct cost saving, particularly surrounding the proposal to allow trustees and charity employees the flexibility to choose their advisor, including a trustee or employee of the charity. However, the relaxation and widening of the designated advisor, whilst having benefits, will require charity trustees to be more careful on whom they choose to make sure they receive appropriate independent and objective advice. The duty on trustees to obtain and consider advice will remain.

Overall, the changes are expected to simplify this complex area of law and will be welcomed by many working in the sector. However, with the widening of the advisor to include estate agents and agricultural valuers, this may indeed be the end of the “Qualified Surveyor’s Report” as we know it but we trust not the quality of advice that charities expect and value.

If you have any questions in relation to these changes and how they may impact your charity please do get in touch with William Ray, Partner in the charities team. 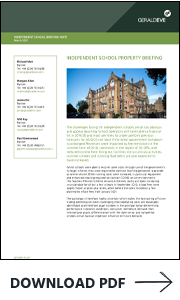