Occupiers continue to commit to the capital despite economic uncertainty

Occupier sentiment remains positive across central London, with 7 million sq ft taken in the first half of the year, an 11% increase on the same period in 2017. Despite the uncertainty in the economy as the UK moves closer towards Brexit, high leasing activity is expected to continue with a record 3.9 million sq ft currently under offer.

Once again, the media and technology sector were the main drivers of occupier demand, and accounted for 26% of all deals. Notably Google took a further 123,000 sq ft in King’s Cross & Euston, whilst cyber security and data management company, Mimecast, took 114,000 sq ft in the City. Elsewhere Sony Pictures signed a 77,000 sq ft pre-let at Derwent London’s Brunel Building in Paddington.

The high level of leasing activity seen from this sector over recent years is reflective of the changing nature of occupier employment within the capital, with Oxford Economics forecasting positive employment growth in this sector over the next five years.

Professional service firms have also been active, and in particular the legal sector with the recently merged Bryan Cave Leighton Paisner taking 121,000 sq ft as their new headquarters in the City, and Sidley Austin also committing to the City by taking 101,000 sq ft.

The growth of serviced offices across the capital continued, and in particular Spaces, which took 247,000 sq ft across four buildings in the first half of the year. The demand for serviced office space continues to be high, and an increasing vacancy rate for smaller offices in London is a growing concern for traditional landlords, which will need to offer more flexibility and more agreeable terms in order to remain attractive to certain occupiers.

Development completions lead to an increase in availability

Overall availability increased by 5% in the first half of the year, with an availability rate of 5.2% recorded at the end of June.

Whilst the divestment of tenant space continues to be a major part of the market, currently accounting for 23% of total availability, it was the completion of a number of development schemes over the last six months which caused the slight rise. The amount of available new space increased by 15% over this period.

Although there is a further 2.8 million sq ft of new space set to be delivered in the second half of the year, 64% of this has already been let. Also with the strong occupier demand for new, higher quality floorplates, most of the remaining space is likely to be let on completion. Therefore the overall availability rate is unlikely to increase further. 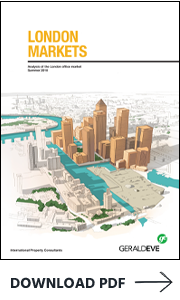