PLANNING FOR THE FUTURE

Home / Insights / PLANNING FOR THE FUTURE

On the 6th August 2020, the Government published a White Paper setting out proposals for the reform of the Planning System in England. The document, titled “Planning for the Future”, although more akin to a Green Paper than a White Paper, sets out “radical reform”, which if taken forward would represent the biggest shake up of the planning system in England since the 1947 Town and Country Planning Act which was the foundation of modern town and country planning in the UK. The Paper seeks “end-to-end reform”, rather than piecemeal change within the existing system.

It seeks to create a system that is “simpler, quicker to navigate, and delivering results in weeks and months.”

Our Briefing is in two parts. The first sets out our initial response and commentary on key aspects of the proposed reforms. The second provides a more detailed synopsis of the proposals themselves. 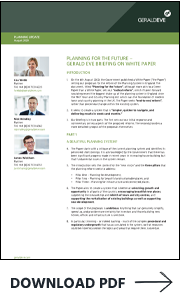