A steady start to 2022 with Q1 dominated by repurposing transactions. Transaction volumes are expected to increase significantly in Q2 though, with £680m currently under offer and an anticipated rise in M&A activity.

The total transaction volume of South East offices for Q1 2022 was £513m across 33 deals, which is 10% lower than the £573m traded in Q1 2021. Nevertheless, with approximately £680m currently under offer and market sentiment improving amid the removal of COVID restrictions, we expect transactional volumes to progressively increase throughout the year.

Whilst Q1 2022 got off to a traditionally slow start with limited stock being launched, we saw sentiment progressively improve with an increased amount of stock brought to market later in the quarter. Excluding off-market transactions, just £266m of stock was launched in Q1. Approximately 50% was launched in January / February (half of which is now under offer or completed), with the rest launched in March.

The trend of buying office space to ultimately repurpose to alternative uses continued in Q1 2022. Approximately £264m of office space was purchased for alternative uses such as data centres, industrial, life sciences and residential in Q1. This included Bridge Industrial’s £55m purchase of Weybridge Business Park which will be repurposed to industrial, and Keppel DC REIT’s purchase of Waterside House, Bracknell, which Vodafone uses as a data centre, for £57 million, reflecting a yield of sub 4.0%.

Life sciences continues to be a major focus for global capital, albeit a lack of stock meant that Q1 2022 activity was subdued compared with previous quarters. One of the key transactions included Breakthrough Properties / Tishman’s purchase of Trinity House, a large-scale redevelopment opportunity in Oxford Science Park for £41m reflecting approximately £25m per acre.

Residential conversion sales have also been a key focus with a lack of remaining stock (due to tighter regulations on permitted development) creating competitive tension and putting upward pressure on pricing. Key transactions included McKay Securities’ sale of Great Brigham Meads to Kings Oak Capital for £19m and CCLA’s disposal of Syward Place in Chertsey, which is rumoured to be under offer considerably ahead of the £13m asking price.

Property companies were the most active purchasers and vendors in Q1, accounting for 31% of total acquisitions and 47% of total sales. This trend looks set to continue with property companies contributing to approximately 41% of stock brought to market in Q1 2022, followed closely by institutions (30%).

From an occupational perspective, offices continue to remain an experiment in finding the optimal layouts to maximise collaboration and amenity provision. Whilst occupiers may reduce the amount of space they occupy, we expect a rise in demand for better quality accommodation with a focused ESG agenda; evidenced by record headline rents set in St Albans, Windsor and Wimbledon at £38.50 psf, £43.00 psf and £56.00 psf respectively. With cost inflation curbing the development pipeline, we expect to see further rental growth for the best quality stock.

We anticipate a significant increase in transactional volumes in Q2. In addition to there being £680m of assets currently under offer, we expect future volumes to be further bolstered by M&A activity, including Workspace’s acquisition of McKay Securities, which is expected to complete in May 2022. With this said, it’s uncertain what the wider impact of the Russian invasion of Ukraine and domestic inflationary concerns will have on investor sentiment. 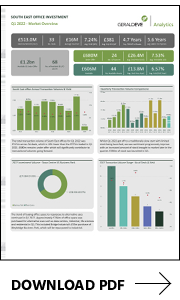