Rising inflation and growing borrowing costs have reduced investor appetite for risk. Whilst the number of transactions increased between Q3 and Q4, the average lot size fell to £18.6m. There were four transactions in excess of £50m in Q4, representing 45% of total volume. This is 48% below Q3 and 69% down on Q4 2021.

Secondary assets experienced the greatest yield shift in Q4, with the lack of accretive debt and investor caution pushing yields to heights not seen since the GFC.

UK institutions were the most active vendors in Q4 (51%). This was a recurring trend throughout the year with fund managers under increased pressure to improve liquidity due to redemption pressures. Well-funded property companies and private investors were the most active purchasers (41%). Sterling’s sustained low levels have continued to attract dollar-denominated overseas investors, who accounted for 26% of acquisitions in Q4 (6.9% in Q4 2021).

Throughout 2022, the Life Sciences sector was a key driver of activity, accounting for 47% of the total volume. The most notable transactions of the year included LCN’s acquisition of the Unilever Campus in Kingston, Longfellow’s purchase of Capital Park in Cambridge, and Railpen buying Botanic Place in Cambridge, advised by Gerald Eve.

The outlook for this year will largely be determined by where and when interest rates peak and the severity of a recession. With occupiers gravitating towards the best space and an increasing number of south-east office markets breaking £40 psf, we will see investors being rewarded for creating the best, amenity-rich, and ESG-resilient space. 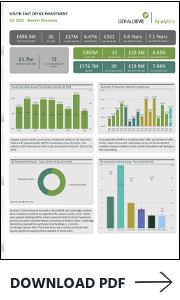 The mini budget has widened the gap between the top end of the market and offices with low ESG credentials. A more cautious approach from investors may have slowed transaction times but the flight-to-quality is here to stay.