Occupier confidence remains despite slow start to the year

Following a slow start to the year, leasing activity picked up during the second quarter, where 3.6 million sq ft was taken, which is in line with the five year average.

Despite the uncertainty surrounding Brexit, and the threat of a “no-deal” scenario increasing, the finance & banking sector displayed its confidence in the London market and accounted for 29% of acquisitions over the last six months. Notably the European Bank for Reconstruction and Development signed a pre-let to take 365,000 sq ft at 5 Bank Street in Canary Wharf, whilst in the City, Brewin Dolphin & Co took 114,000 sq ft at 25 Cannon Street. The demand from this sector has overwhelmingly been driven by lease events, however the Fintech sector is increasingly becoming an area of growth for financial service firms across London.

Media & Technology occupiers have also been active and continue to be one of the main drivers of occupier demand across the capital, accounting for 19% of deals in 2019 so far. The largest deal from this sector was by G-Research, which signed the first pre-let at One Soho Place, taking 103,000 sq ft. Derwent’s development only began construction in Q1 2019, highlighting the strong occupier demand for new space. The ability to recruit and retain the best talent has led to occupiers targeting high quality office space and over the last 12 months, 48% of lettings were for new space, compared to the five year average of 39%.

Serviced office providers accounted for 14% of activity in the first half of the year, with WeWork particularly active taking 255,000 sq ft across the capital. The increase in offering from serviced office providers has lured smaller firms that might previously have signed conventional deals elsewhere, and as a result, the availability rate for smaller offices has gradually increased since 2015.

The high volume of leasing activity, as well as some conversion of office stock to other uses, has led to a fall in the availability rate to 4.9%. In 2019, the availability rate fell in 9 of our 15 markets, and as a result, occupiers are having to pay a premium on larger floor plates where available.

The development pipeline will help ease the supply squeeze with 11.4 million sq ft currently under construction. However 43% of this space has already been let, and the majority of the remaining available space is expected to be taken as the developments move nearer to completion. A large increase in London’s availability rate is therefore unlikely. 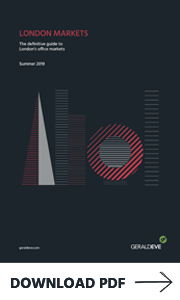