Occupier sentiment continues to be strong

Despite the uncertainty and political fallout surrounding Brexit, London occupiers have been more acquisitive than at any point over the last decade. 8.8 million sq ft was leased across London in the second half of the year, a 25% increase on H1. Leasing activity was particularly strong in Q4, with 4.5 million sq ft taken, the highest quarterly volume recorded since before the global financial crisis.

Media & Technology occupiers have once again been the main driver of occupier demand, and accounted for 28% of lettings over the last 12 months. The increasing level of demand from this sector reflects the changing nature of occupier employment, which looks set to continue despite the Government’s proposed new Digital Services Tax.

Serviced offices had their most acquisitive year in 2018, and accounted for 17% of central London lettings. Take-up increased by 19% over the last 12 months, demonstrating the sector’s growing confidence in the market’s fundamentals. Currently serviced offices occupy around 4% of London office stock, and this is expected to double over the next decade. WeWork added an extra 600,000 sq ft last year, which makes them the second largest occupier of space in London, behind the government.

The ability to recruit and retain the best talent has led to occupiers targeting higher quality office space. Throughout 2018, 51% of lettings were for new, grade A space, compared to the five year average of 39%. As a result, there is a lack of available grade A space, prompting an increase in pre-letting activity, but also a 24% increase in second hand refurbished space.

The finance & banking sector accounted for 13% of lettings in 2018, with the majority of activity continuing to be located in the East, with 52% of deals signed in the City. The demand from this sector has overwhelmingly been driven by lease events in the past, however the fintech sector is increasingly becoming an area of focus for financial service firms across London.

Improved transport and infrastructure has already had an impact on a number of our London submarkets in recent years, notably rental values in Fitzrovia, Paddington and Farringdon & Clerkenwell. We expect this to continue with the construction around HS2 at Euston, but also when the benefits are seen from Crossrail, further rental growth is anticipated. 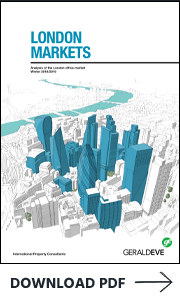