The definitive guide to the UK’s distribution property market.

Following the December election result, the first two and a half months of 2020 were business as usual for the UK logistics market and we recorded robust occupational and development activity. In line with the 5-year average, Q1 take-up totalled a healthy 11.6 million sq ft, which was an 11% quarterly increase. However, the introduction of social distancing measures due to the spread of Covid-19 has had a profound impact on all property segments, logistics included.

Compared to other sectors, the logistics market has been somewhat insulated from these effects as a large proportion of activity related to logistics is defined as ‘essential’ activity, such as the delivery of food and other supplies. Indeed, these sectors have seen a significant surge in demand, with several short-term storage requirements and companies reoccupying former marketed premises to cope with the increase in orders, such as Tesco in Milton Keynes and Manchester.

Activity was driven by retailers and wholesalers in Q1. As well as food retailers, such as Aldi’s purpose-built 1.3m sq ft NDC in Leicester, homeware retailers were particularly active as Home Bargains signed a pre-let on an 880,000 sq ft unit at Omega North Warrington and The Range took a 527,000 sq ft unit in Normanton. Online retailers have also been active, and we are aware of two proposed warehouses for Amazon in Dartford and Gateshead totalling almost 5 million sq ft. Both schemes are awaiting planning permission but are indicative of the underlying need for logistics space by the internet retail sector. There are reports too that the NHS took occupation of 14.25 million sq ft of warehouse space across the UK at the end of March for the storage and distribution of medical supplies. This is unique in the scale and immediacy of occupation and the short-term, ‘off-market’ nature of the demand. Whilst some of this activity was reportedly occupying ‘grey’ space of 3PLs, such occupation will feed a further tightening of supply in some markets. The overall availability rate fell from 7.1% to 6.7% in Q1 – the first fall in over a year – as the volume of secondhand and available speculative space under construction fell.

The amount of new space completing development in Q1 decreased 45% on the quarter to 4.5 million sq ft, the majority of which was in the Midlands and completed in the first two months of the year. Some scheduled developments struggled to complete on time as either social distancing impacted site access or construction companies had concerns for staff safety. Space that was under construction as of end-Q1 totalled 18 million sq ft, with 8.1 million sq ft of it speculative. Developers remain committed to finishing these schemes although around a third have halted construction, given labour and materials shortages or due to concerns over safe working practices on site. Whilst there are ‘oven-ready’ sites that in theory could start development, appetite for further speculative development in 2020 is now weak. 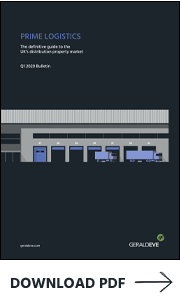 Following a temporary halt in development activity on space under construction at the end of Q1, many contractors have implemented safe working practices and returned to site to finish off projects.

Although availability fell in Q1, we are likely to see an increase in secondhand supply in 2020. Several occupiers, especially manufacturers hit with forced plant closures, or those high street retailers or dependant logistics companies feeling the fallout of reduced consumer demand, are likely to return unwanted space. Industrial property occupiers linked to the aviation or hospitality industries, two of the most affected segments of the economy by the impact of Covid-19, are also at a higher risk of failure. We expect prime rents to remain broadly flat in 2020 but expect incentives to move out as landlords offer more favourable terms for occupation, especially on longstanding available stock.

Blackstone continued to be an active investor in March, although the overall volume of warehouse investment was low in Q1, even before the impact of Covid-19. Whilst there are opportunistic investors and overseas capital keen to access assets at a potential discount, there is limited distress on the sell-side, with only occupier sale and leasebacks providing new investment stock. Investors are likely to favour prime, long-income assets in the current environment. Secondary assets with weaker covenants, void potential or capital expenditure commitments will attract more bearish assumptions, which will negatively impact pricing. The severity of this impact will depend on the length of the lockdown and magnitude of the disruption, although high frequency data is already showing an impact. Distribution warehouse equivalent yields moved out 9bps in March, which drove monthly total returns negative for the first time since the aftermath of the Brexit referendum in July 2016.