The definitive guide to the UK’s distribution property market.

The logistics property market was not immune to the impact of the economic and political uncertainty in the UK at the end of 2019, and Q4 take-up was 24% lower than Q3. With 10.5 million sq ft taken-up in Q4, the overall volume was 11% below the 5-year quarterly average but in line with the 10-year average.

Retail occupiers were, by their own standards, quiet in Q4, with manufacturers and logistics occupiers the most acquisitive. Manufacturers accounted for 38% of all activity in Q4, as MEG Group signed up to a bottling factory at Dove Valley Park and the UK Battery Industrialisation Centre decided to locate its facility in Coventry. Such large-scale commitments by manufacturers was counter to the official economic readings from the UK manufacturing sector, which ended the year weakly.

In terms of the quality of space, occupiers again favoured new or refurbished space, which accounted for 57% of all quarterly activity. Pre-lets drove this take-up, but there was also 1.64 million sq ft of speculatively developed space taken-up in Q4, within 10 buildings. Logistics was the sector most interested in speculative developments, as companies such as NWF and Westcoast Holdings committed to such space.

Take-up in 2019 totalled 47 million sq ft, which was 7% down on 2018, but comfortably above the 10-year annual average. Even though some occupiers delayed decisions until after the election result was known, the annual total for 2019 still ended the year just shy of the 5-year annual average. Considering the significant uncertainty in the second half of 2019, the annual total was above expectations and indicative of the underlying health of occupier demand.

What was also encouraging in 2019 was that despite subdued activity by retail and wholesale occupiers, accounting for only 29% of annual take-up, occupiers from other sectors stepped in and kept the annual total elevated. Manufacturers were particularly active in 2019, driven by Jaguar Land Rover’s commitment to locate their almost 3 million sq ft logistics park at Appleby Magna. As such, demand from the automotive manufacturing sector was above average in 2019 – a theme which could continue into 2020 given the increased demand for electric vehicles and the necessary large-scale facilities required. 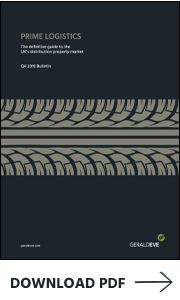 Occupiers do however now have an enhanced quality of choice on offer. The combination of new / modern stock and space under construction now accounts for 44% of the total available stock in the UK. This in stark contrast to the market in 2014 where only 16% of all availability was new or modern and very little was under construction. Whilst the availability rate increased in 2019 and is at a five year high, the composition of available supply is of a much higher quality now than seen previously. This may put downward pressure on secondhand rents in 2020.

Less speculative space than purpose-built started construction in Q4. This was the first time since Q3 2018 and perhaps represents developers’ hesitancy to start large-scale speculative projects in a quarter dominated by Brexit and the UK general election. Viewed on a rolling annual basis, the volume of speculative development fell through 2019, but remains elevated in an historic context.

Now that there is more certainty in the market, we may see more commitment from developers to commence speculative schemes. However, there are currently 50 speculative buildings under construction across the UK totalling 6.6 million sq ft with most of these schemes due to complete in 2020. So, whilst developers are likely to have more confidence in the market, they are also likely to continue to closely monitor occupier interest in existing schemes before starting new projects.

DESPITE THE ‘NOISE’, WAREHOUSE INVESTMENT REBOUNDED IN Q4

Prime yields held firm in Q4, as sentiment for prime logistics assets remained strong and much of the activity seen in Q4 was conducted off-market or with limited marketing. However, following the election result, market participants report an increase in enquiries and we could see a strong start to 2020 as some of the pent-up demand is released.

In Q4, the largest deal of the quarter was the purchase by MSREF of the Tudor portfolio (7 assets) for £241 million / 4.05% NIY, but there were a handful of standalone buildings over £50 million that transacted too. These include the purchase of Dixons Carephone’s warehouse in Newark by Cabot for £80.0 million / 5.1% NIY and DWS’s purchase of Europa Group Worldwide’s facility in Corby for £60 million.

Across the UK, we forecast an average 1.8% annual rental growth over the next five years: half the rate of growth of the last 5 years. This means that in several locations, it is not going to be possible to rely on rental growth or yield compression and income will become increasingly important to returns through 2020. As developers and investors look to maximise returns, we could see an increase in the number of former retail warehouses repurposed to accommodate industrial uses, particularly in core markets in and around London. This is especially so as employment land close to major urban conurbations is in short supply and the rental profile of both assets are converging.

We have collaborated with our European International Alliance to deliver EURO LOGISTICS – an insight into the Europ… https://t.co/0tYM8vEbYB