Sentiment improved temporarily in late December 2019 and through some of Q1 after the decisive December 2019 general election. The positive market perception was of greater clarity on Brexit and the Conservative government’s stance towards the UK business sector.

However, investors are now very much risk-off again until the length and depth of the COVID-19 pandemic becomes clearer. There is increased scrutiny of the risk of tenant default and attendant impact on cashflow. Occupiers linked to discretionary spending are viewed most unfavourably, with food and logistics likely to be most resilient in the short term.

Many planned sales have been postponed, especially by vendors selling through choice rather than necessity. Transactions currently in process as of late March have largely remained on track, although purchasers have allocated enhanced resources for due diligence exercises and deals will take longer to get through the legal process.

The unprecedented closing of certain parts of the UK economy will have a severe impact on Retail property. Around 44% of discretionary spending is at risk of loss or delay in the coming months, particularly in the hospitality industry. Forced closures will impact landlords’ ability to collect rent income over the coming months and many occupiers are likely to struggle to meet quarter day rent payments.

Following recent volatility in financial markets, sterling has depreciated by around 9% on a trade-weighted basis compared with two months ago. Multiple overseas funds are raising capital to take advantage of both this adjustment and potentially lower pricing later in 2020. This could be particularly the case for Retail, where there may be forced sales of many distressed assets at greatly
reduced prices.

Investment transactions will be severely affected in Q2, with a pickup expected in the second half of the year. All Property annual total return is set to turn negative in 2020 for the first time since 2008. This should rebound in 2021 on the proviso that the “hard stop” in economic output is limited to Q2 and consequent negative impacts do not become entrenched. 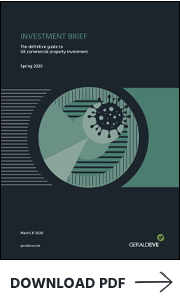 IMPACT OF CORONAVIRUS ON THE UK INDUSTRIAL AND LOGISTICS MARKET