Prime Logistics is an essential tool for any developer, investor or occupier interested in the market for logistics buildings over 50,000 sq ft in size across each of the UK’s 26 key distribution markets.

Inside the bulletin, we take a balanced look at each segment of the market and provide you with a brief snapshot of our view of quarterly activity.

Occupier take-up was 13.8 million sq ft in Q4 2020, a decrease of 13% on Q3 but
12% above the 5-year quarterly average. This pushed the annual total for 2020 to a record-high 56.6 million sq ft, a 22% increase on 2019 and the strongest year for occupational take-up since our records began in 2006. Online retailers were active again, but it was logistics companies that were most acquisitive in Q4, accounting for 49% of all activity. The Weerts Group, Clipper, DHL, Whistl and Hermes all made long term commitments as re-intensified Covid restrictions brought about an increase in demand for home delivery and galvanised decision making to invest in logistics networks.

The take-up of purpose-built and speculatively-built space continued to drive demand in Q4, accounting for 64% of all activity. Occupiers invested heavily in new facilities to help sustain long term growth and future proof their supply chains. The most active occupiers in Q4 had specific requirements in terms of building location, specification, and power and fibre availability. This fed through into increased, concentrated activity for the best product. For the up-and-built second hand and speculatively-built buildings occupied in Q4, many occupiers sought early occupation to help manage sustained peak levels of demand.

Amazon captured almost a quarter of the letting marker in 2020

Retailers and wholesalers were the dominant occupier type in 2020, accounting
for 47% of all activity. Online retailers continued to respond to the growth in internet retail, which reached 36% of all retail sales in November 2020. As such, Amazon continued to be acquisitive, alone accounting for 24% of all take-up in 2020. The national lockdown in place until at least March is set to underpin sustained consumer behaviour change and cement online retailers’ decisions to invest long term in logistics networks.

Logistics occupiers were also active in 2020, particularly in the second half of the
year and accounted for 34% of annual demand. Clipper Logistics, DHL, Hermes, Royal Mail and Wincanton were the most active logistics occupiers in 2020 as they reacted to the urgent increase in demand for their services. Logistics demand was broad-based, with 65 individual logistics occupiers taking space in 2020, itself a record for individual occupier activity in the sector. We expect logistics demand to remain elevated in 2021, albeit with more measured and less urgent requirements than in 2020 given operators’ experience of the impact of Covid restrictions on demand for their services.

A weak year for manufacturers

Manufacturers accounted for 16% of occupier demand in Q4. This is low by the sector’s standards, and caps off a poor year for the manufacturing sector which only accounted for 13% of 2020 take-up. Some of the manufacturing activity recorded in Q4 was Covid-related (Pfizer bought land for development in Havant and PPE manufacturer Ramfoam committed to space in Tividale), but the majority was home or construction related. This includes home building specialists such as Taylor Wimpey and M-AR, and manufacturers related to homes, such as windows, furniture, tiles, fridges and floor producers.

UK manufacturers are also now dealing with the practical realities of Brexit. So far, the ‘rules of origin’ clauses in the Brexit trade agreement are causing problems with exporting goods not ‘in transit’. This is notably causing issues for food & drink and clothing operators in the UK. Consequently some businesses may have to reduce trading with the EU if it becomes too expensive, or move to split their supply chains to avoid having to do cross-Channel trade. Freeports remain an option for the Government to stimulate demand, and several ports in London and the North East are bidding for the special economic measures freeport status offers.

Prime headline rents increased in 23 of our 51 Gerald Eve centres in Q4. These increases equate to a further 1.7% national prime rental growth in Q4, and 4.1% growth in 2020 as a whole. Regionally, it was London & the South East and the East Midlands where prime rents grew strongest in Q4. Demand for urban logistics assets is high and likely to continue as occupiers seek out space ever closer to urban centres. This could further drive London rents, especially as the transport costs savings for logistics occupiers securing space closer to end consumers often outweigh the elevated rental profiles of such space.

We expect strong demand for logistics property to continue in the first half of 2021, especially now we have a further national lockdown in effect. However, in H2 2021 restrictions are likely to be eased and government financial support packages are planned to have finished. We have therefore taken a more cautious view of forecast rental growth, with a UK average of 1.8% per year over the next 3 years, and growth front-loaded into 2021 when occupier conditions are likely to be most acute.

Record volume of development gets underway in Q4

The overall UK availability rate remained at 6.5% in Q4 and has been around 6% for the best part of five years now. In response to these consistently low rates and bullish occupier market there was a large increase in development activity starts in Q4. In all, there was 12.9 million sq ft of starts in Q4 – the largest volume of new development in one quarter on record. Around a third of this was speculative, with 28 separate buildings starting with an average size of 147,000 sq ft.

It was, however, the development of Amazon multi-storey buildings which really drove this increase in development activity. Tritax Symmetry started on the 2.3 million sq ft Littlebrook scheme for Amazon and Panattoni started on their equally large facility in Swindon. These purpose-built developments, together with others such as IM Properties starting on DSV’s 450,000 sq ft unit in Doncaster drove up the rolling average purpose-built building size to the highest on record. Conversely, on a rolling four-quarter basis, the average building size of space under construction speculatively has stayed broadly constant.

Long-let prime logistics was one of the most in-demand asset classes of all property segments in Q4. Most investors see logistics as one of the few areas offering both income security and rental growth prospects. With government bonds and gilts at record lows, the spread against distribution warehouse yields remains favourable despite inward yield shift every month since the first Covid lockdown in 2020. The issue for many investors is that it is now more difficult to find opportunities, and, except for a few profit-takers and fund redemptions, vendors are generally reluctant to sell.

However, the completion of three large portfolios: the EPIC portfolio bought by Blackstone for £335m, the Marlin portfolio bought by AIMCo (Canada) for £260m, and, the Platform portfolio bought by Blackstone for £473m drove an increase in volumes traded to over 2.4 billion in Q4, the largest quarterly volume traded on record. The UK logistics sector’s defensive qualities will continue to attract global attention and whilst there will be a limit on how far yields will compress and how high rental growth expectations can be set, there looks set to be no shortage of willing and able purchasers to compete for the right assets in 2021. 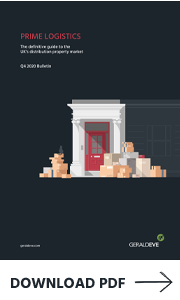 Pleased to have advised Legal & General Investment Management (LGIM) on hotel operational due diligence as it becom… https://t.co/yKZQGh0o1t