Prime Logistics is an essential tool for any developer, investor or occupier interested in the market for logistics buildings over 50,000 sq ft in size across each of the UK’s 26 key distribution markets.

Inside the bulletin, we take a balanced look at each segment of the market and provide you with a brief snapshot of our view of quarterly activity.

In Q1 2021 14.7m sq ft of logistics space was taken-up in the UK, a 13% fall on the record Q4 2020 but nevertheless 16% above the five-year quarterly average. Covid has had significant implications for the way we live, work and shop, which has in turn impacted existing logistics supply chain networks. This, in addition to the new Brexit arrangements and recent government policy announcements has continued to create significant activity in the occupier market.

Occupiers have been quick to read the property implications of Covid and demand over the last 12 months totalled 64m sq ft – the most active period in our history. Take-up was 37% higher than in the 12 months pre-Covid. Occupier interest was focused on up-and-built stock in Q1, with 72% of activity involving either secondhand or speculatively-built buildings. This stands in contrast with activity in 2020 where pre-lets and forward-commitments were more commonplace, highlighting the increased urgency of current occupier requirements.

A more diverse range of occupiers in Q1

Logistics operators and online retailers were again active in Q1, together accounting for 62% of all activity. However, there were some new names on the roster in Q1. The City of London Corporation received planning permission on its new consolidated London food market on the site of the former Barking Power Station; Pets at Home secured planning on their 670,000 sq ft unit in Stafford and ASOS took the speculatively-built Fradley 437. Amazon was quiet by its own standards in Q1, only committing to a couple of buildings, although has started Q2 strongly by exchanging on two adjacent mid-box units in the West Midlands, with one potentially being used as van storage.

Occupier demand in Q1 was more diverse than in 2020. Manufacturers bounced back after a quiet 2020 and several interesting new sub-sectors, such as green energy production and manufacturing, film and TV production studios, home improvement and specialist food manufacturers/logistics, were all active taking space.

Availability rate falls to 5.7% – The lowest on record

The combination of occupiers taking up-and-built stock, together with the significant volume of space under offer, resulted in a sharp reduction in supply in Q1. The UK availability rate fell for the fifth consecutive quarter to 5.7% – the lowest overall rate of availability since our records began in 2006. The average time buildings had been on the market in Q1 was 11 months – a much shorter amount of time than the average 18 months in Q1 five years ago.

The recent spate of speculative development means that there is a better quality of space on the market now compared with five years ago, and as occupiers are so acquisitive, we are seeing a higher churn rate of marketed buildings than previously too. Anecdotally, several occupiers are concerned about the lack of appropriate space to accommodate their future growth plans.

Developers acquire and prepare land to capitalise on market conditions

At the end of Q1 2020, there was 37m sq ft of space under construction in the UK across 137 individual schemes. Approximately 12.6 million sq ft of this, or 34%, was being developed speculatively. In Q1 itself 9.2m sq ft of this space started construction, with around half speculative. This indicates a 28% drop in starts compared with Q4.

However, over the last six months developers have been busy acquiring sites and working up planning applications to capitalise on current market conditions. In total, over 12m sq ft of planning applications were submitted in Q1, the highest in more than four years, with the volume of site acquisitions similarly high. Even with rising land prices and stiff competition, developers have confidence in the logistics market and are buying well-located sites and actively preparing for future development activity.

Prime rents increased by an average 2.2% in Q1, with the strongest growth recorded in London locations such as Basildon, Enfield, Hemel and Park Royal. Scotland too recorded its first increase in prime rents in over 10 years in Q1. Since the start of the pandemic in Q2 2020, prime rents have grown by an average 6.2% across the country to a national average of £8.05 per sq ft, with London and the North of England recording the strongest growth.

Market conditions have meant that landlords have been able to hold firm on their headline quoting rents in Q1. We have, however, seen a handful of idiosyncratic deals agreed in Q1 where occupiers have successfully leveraged their position, especially on un-fitted-out buildings incapable of accommodating immediate occupation, and buildings that have been void for over a year. The current strength of the investment market has persuaded some landlords to seek to incentivise a tenant on these buildings through a few additional months’ rent free period, in order to generate income and/or enhance the investment proposition to help raise capital for further development.

Since it became clear that the logistics sector was set to benefit from covid, the weight of money targeting the sector has increased substantially. Capital previously allocated to retail or office sectors was re-routed to industrial and existing capital targeted at industrial was increased. However, available investment stock remains in short supply, with few motivated sellers outside of profit-taking owners looking to sell and recycle capital back into the sector. Portfolios were a key driver of the 1.34bn investment volume in Q1 – accounting for 64% of all activity and helping to almost double the average lot size since the onset of the pandemic to over £30m.

Such market conditions have had a profound impact on capital values – with average prime yields moving in an additional 20bps in Q1 alone, and a hefty 63bps since Q2 2020. Looking forward, as other property sectors begin to show signs of stabilisation as the lockdown is gradually lifted and bond yields continue to increase as the recovery prospects brighten, such downward intensity is likely to ease, but industrial is still expected to again be the sectoral outperformer in 2021. 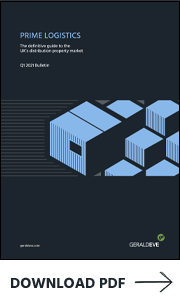 RT @JerrySchurder: Thanks @MattChorley for having me on @TimesRadio to discuss the growing calls for significant cuts in #businessrates. Th…