Overview
The UK economy was characterised by political turbulence through the final quarter of 2019, as the country underwent a second Brexit extension and a general election. Q4 has traditionally been the most active period for investors, however Q4 2019 proved to be defined by a lack of stock as investors held back sales in the run up to the Brexit deadline. That said, a large proportion of deals carried forward from the summer completed before the year end, with 19 deals (c. £522m) completing in December once clarification on the general election was provided. Total transaction volume for 2019 totalled £3.16bn, reflecting a 16% drop on 2018. The total transaction volume for the quarter was £1.224bn, which exceeded Q3 volumes by 35% and by 17% on its respective quarter last year. Furthermore, the outcome of the general election has provided greater political clarity and with a clearer direction for the UK, investors appear more optimistic for 2020.

Amid the uncertainty, the deployment of capital remained focused on well-positioned core assets with strong tenant covenants. Institutions competitively targeted core prime opportunities providing security of income and liquidity and prime net initial yields held stable at 5.00%. The ‘flight to quality’ by institutions was a prominent trend for Q4, as they recorded £405m of acquisitions, establishing themselves as the most active investor by a notable margin.

The south east office occupational market has shown good levels of take-up and a fall in availability for the submarkets offering the best quality and most flexible stock in core town centre locations. This has provided a compelling opportunity for investors and developers targeting value add/repositioning assets.

Looking ahead we expect there to be a good appetite for Grade A south east offices as new opportunities are launched to the market and the more evergreen capital selectively returns in search of value and growth. The greater degree of political certainty will improve liquidity positions and in turn translate into higher transaction volumes for 2020. 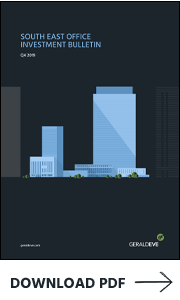 UK institutions were net vendors at the end of the year as they continued to experience volatility from redemptions on their open-ended retail funds.

Property companies increased their activity from the previous quarter and accounted for a total of £180m over 13 deals, making them the most active investor by number of deals.

Whilst the value of sterling jumped to its highest level for three years against the euro following the election result, the UK remains attractive to international buyers.

Despite the rise in demand from institutions and property companies, private equity interest for south east offices proved very strong, accounting for £222m of acquisitions.