Whilst leasing activity picked up in the second half of the year, overall take-up in 2019 was 6% down on 2018. However, the nature of leasing was encouraging, with lettings driven less by lease events, as they were in 2018, and more by firms recognising the need to upgrade their space. Quality space is now part of occupier’s recruitment and retention strategies, with significant pre-lets signed by BT (One Braham), Nationwide Building Society (Post Building), Diageo (Turner House), and Apollo Global Management (Soho Place) reflecting this.

Occupier demand will remain robust across central London, despite the continued uncertainty over the UK’s future relationship with the EU. Office-based employment is forecast to expand by 7.1% over the next five years. Transport improvements, such as Crossrail and the proposed extension of the Northern Line, will also make central London more accessible to a wider pool of talent, supporting occupier growth strategies.

Across central London, average lease lengths have slipped from 12 years and one month in 2015 to just nine years in 2019. The shift has been attributed to the increasing popularity of flexible workspace, which has prompted landlords to offer occupiers shorter terms. The current trend has also been driven by the growth of London’s media and tech sector, which places a premium on greater lease flexibility. 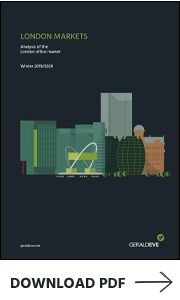 54% under construction is let

In 1985, there were 159,000 media and tech jobs in London, two-thirds that of finance and banking. In 2017, the levels of employment across the two sectors was equal, but over the next 10 years, Oxford Economics forecast media and tech employment to reach 419,000, 17% above finance and banking employment levels. The European Startup Initiative suggests that leaders of tech companies regard London as the best city in Europe to start a tech business.

The office availability rate fell to 4.9% across central London in 2019. Despite a strong development pipeline, much of the new space has been pre-let before completion. The Post Building (344,000 sq ft), Two Southbank Place (330,000 sq ft),The Brunel Building (244,000 sq ft), and Five Bank Street (708,500 sq ft), were either fully let, or close to full occupation on completion. Currently 54% of space to be delivered over the next three years has already been leased.

Investment activity was 38% down in 2019, with Brexit and election uncertainty having a significant effect. However, despite an improved economic outlook, we don’t expect a substantial rebound in investment in 2020 due to limited willing sellers. With the UK now focused on trying to agree a trade deal before December 2020, some uncertainty is likely to continue, and increase towards the end of the year.